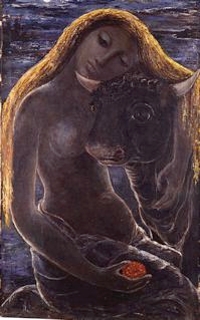 The world premiere of a chamber oratorio inspired by the paintings of Mary Holmes, based on the Greek myth as told by Ovid and Moschus.

Europa, a Phoenician princess, awakens from a fearful dream in which she finds herself pulled between two women. One of them, possibly her

mother, begs Europa to stay with her. The other beckons Europa to leave her home for a foreign land. She finds herself gently persuaded by the second woman, but wonders why she would ever leave the family she loves. Putting aside her cares, she goes down to the beach to gather flowers and play with her friends.

Unwittingly she catches the fancy of Zeus who lurks nearby.  He shamelessly intimates himself into the girls’ inner circle disguised as a gentle bull.  The adventure begins…. 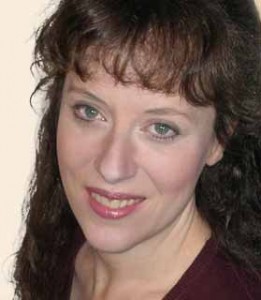 Tenor Brian Thorsett has performed over 90 diverse operatic roles and fosters a repertoire of more than 200 works. He is a graduate of SF Opera’s Merola Program. Brian is on the faculty at Santa Clara University, where he directs, conducts and teaches.

Jonathan Khuner is assistant conductor for San Francisco Opera, NY Metropolitan Opera, and Chicago Lyric Opera, and is Music Director for Berkeley West Edge Opera. He has assisted in operas by many living composers, including John Eaton and John Harbison. Other groups for whom he has conducted new works include American Opera Project, Composers Inc, Earplay, and Sonic Harvest.

with the Sonic Harvest Players: 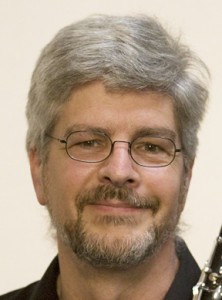 Peter Josheff is a composer and clarinetist based in the SF Bay Area. He is a founding member of Sonic Harvest and of Earplay, and also a member of SF Contemporary Music Players, Empyrean Ensemble, and Eco Ensemble. He has performed with many groups including the Paul Dresher Ensemble, Melody of China, Composers, Inc., and SF Sound.

Online bookings are not available for this event.

Events at a Glance